5 Signs You’re Doing Too Much 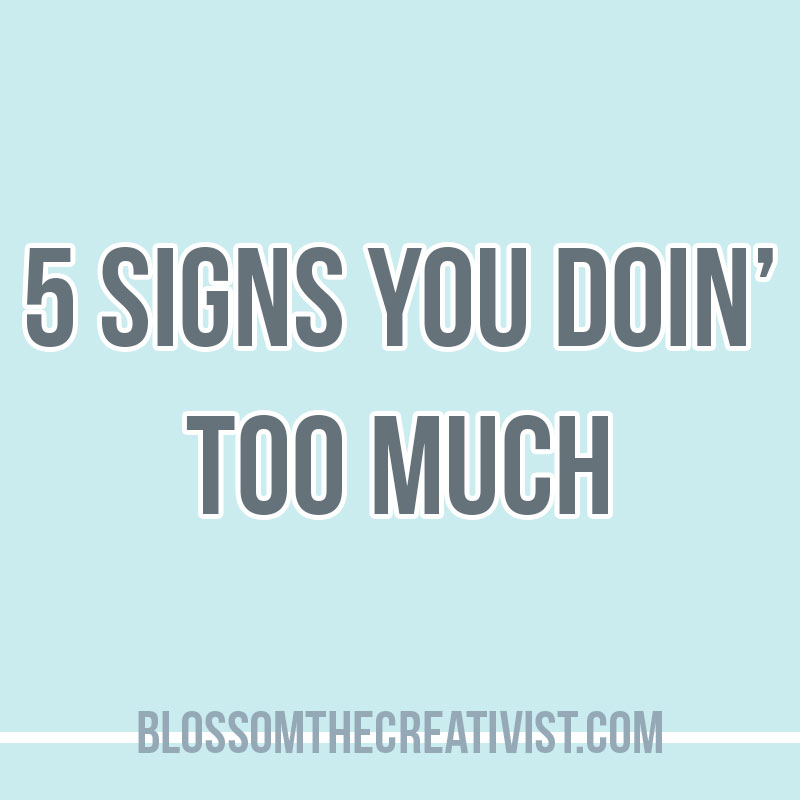 Is doing too much a bad thing? In this technological day and age where all bloggers and websites have an article on being productive, it seems the busier we are, the more successful we are.

However, let’s get a few things straight. Being productive is not the same thing as being busy.

Doing too much isn’t the same thing as being productive. And it’s a lesson that inspired this story.

Because you kinda did.

So, how do you know when you’re doing too much?

5 signs you’re doing too much

1. You’re losing motivation to do everything.

You’re sleeping through all your alarms or you’re not even making an effort to set them. What’s the point of starting the day when you have to commit to something you don’t want to do? I normally wake up at 7 to get work done. Every day last week (Spring break) I was waking up after 9.

3. You’re complaining/questioning yourself a lot.

And you’re complaining because you’re bitter. It’s your inner you battling your outer you (I know there are psychological terms explaining this but I forgot…alter ego and ego or something?). Every little thing gets on your nerves and you feel the need to talk about it/journal about it. I learned that when I’m committing too much time to things I hadn’t planned on putting my life in, I’m always complaining. I’d be questioning myself, why oh why am I doing this? I hate this class, I hate doing this, why didn’t I plan this out right?

4. You’re texting one-worders to people you actually care about.

If you’re a texter, you’ll see that you don’t really have enough time, energy, or motivation to send out full-out texts. You might respond with “okay’s” and not make any attempt to finish the conversation. I was over the—-caf

I stopped texting because I wanted to get my work done as quick as I could so I could relax. However, in the end, I never ended up relaxing. And if I really wanted to talk, I’d call my friend and complain even more.

5.You’re neglecting the things you are passionate about.

And that, my friends, is when I noticed something was wrong. My blogging was suffering, my youtube was suffering, my happiness was declining. Everything just felt like a waste of time. Once something holds precedence over the things you genuinely care about…I believe that’s the true beginning of a mediocre life filled with misery.

[Tweet theme=”tweet-box-shadow”]Once something holds precedence over the things you genuinely care about,that’s the beginning of a mediocre life[/Tweet]

I know what you’re thinking. Girl, shut up. You’re barely 20 years old. What do you know about living?

And you’re right! I’m still a little sophomore. Maybe I’ll look back at this and say I was overexaggerating…or maybe I’ll look back and appreciate that I made the mistake early in life. So that I won’t be working a 9-to-5 job that I don’t care about. So that I’m not going to continue to live a mediocre life filled with misery.

My mistake was undermining the amount of work I had to do as a dance captain, a student, and a business owner. Adding in extra activities that didn’t contribute to my goals. Spending waaayyy too much time eating. Not living my days purposefully, and then continuing to repeat those mistakes once I learned they were mistakes. So now, I have to make up for it by committing much time to things I could have planned to do in increments earlier.

Other (funny) signs you’re doing too much:

Call to action: Write down your goals below. How are you planning on reaching them? What are things that are standing in your way of these goals? How will you get around them?

← Prev: Student Debt: What  NOT to do to Pay it Off Next: How to Not Get Consumed by Other People’s Lives on Social Media →