Do I Need to Eat Healthy AND Exercise to Lose Weight? 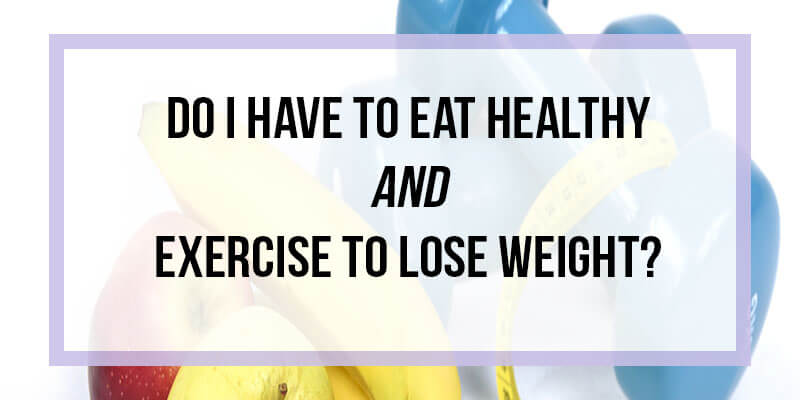 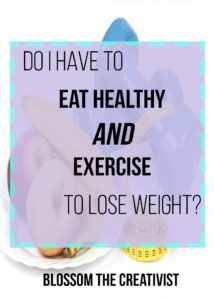 Losing weight and living a healthier life is a long, never-ending race with hamburgers and bad choices all around the corner. And sometimes, these detriments may tempt you to veer off-path. So then you ask yourself: do I need to eat healthy and exercise to lose weight? Before I close with the cheesily-predictable-yet-true statement that you can do anything you put your heart and mind to, let’s figure out why you feel the need to not do both.

Why You Crave Bad Foods

Because it’s finger-lickin’ good, duh. But there is science behind that sauce! Those packaged Oreos were not baked with love. More like processed, highly-addictive ingredients. These chemicals littered in the ingredients list are more often than not a disguise for poison—and not just any poison, but the love spell poison that keeps you on your knees begging and craving for more.

Ever wake up and craved burgers and fries? Fried foods are a whole ‘nother ball game with a new batter: trans-fat.

It’s the unhealthiest fat you can torment your body with. Yet it’s the fat that makes those fries so finger-lickin good! Trans-fat can be found in several processed and fried foods: donuts, fries, pizza, and pretty much almost all the frozen/television dinners, just-add-waters, mac- n-cheese- in-a-cups that you have stuffed in your dorm fridge.

And mind you, it’s okay to eat processed foods once in a while. The problem is most of us get stuck on the “once in a while” part. I mean, people have veered so far off from the path that they legitimately think burgers are healthy.

Why You Don’t Crave Exercise

Common complaints I hear from people regarding why they can’t exercise are:

And besides the first excuse, I could totally, totally, TOTALLY  identify with each one of those people at one point in my life.

But whenever I did happen to share the same thoughts, I’d imagine myself months from that time, slim thick with my cute self. A hot ROD. And that wasn’t gonna happen with me potatoe’ing on the couch all day. So I had to get to work, and if you click on the banner below, you’ll know exactly how.

At this point, you’re probably rooting for getting rid of one or the other for the reasons listed. Wellp, got some news for you.

What the Science Says:

In a research article published in Libertas Academia, a low-calorie diet and exercise were both scrutinized to reveal that exercise plays only a secondary role in weight loss. The number of calories burned while exercising simply wasn’t enough to burn off that McDonalds combo (hypothetically speaking).

Hoorah! Exercising isn’t as effective! So that means you can skip the exercising and just eat clean right?

MMM, not quite on that one either.

Yes, low-calorie diets showed stronger results of weight loss, but with the reduction of weight, you also have the addition of unstable moods and cravings, the study reveals. Tryptophan, an amino acid, helps in regulating your mood and preventing you from going bonkers at the slightest of changes.

And not only will a low-caloric diet cause you to become as moody as a pregnant woman, but it’ll even cause you to feel more hungry. The production of ghrelin, the hormone that makes your stomach growl (it’s actually your small intestines btw) increases and hormones like leptin, which tell ghrelin to shut up, decrease. In other words, when you deplete yourself of calories and subsequently lose weight, your body physiologically cries out for more food. So now you’re not only moody, but hungry. And I think the last think you’ll want to pick up is an apple. Unless that apple is a Snickers bar.

So what’s the answer?! What should you do: exercise or eat healthy?!

“The combination of diet with resistance training seems to be more effective than diet or diet with endurance training in the reduction of body mass and fat mass,” —Libertas Academia

You’ve heard it straight from the study’s mouth. Exercising alone isn’t enough and reducing your caloric intake alone can make you hungrier (and crankier).

If you want to lose weight the healthier, happier way, you need to commit yourself to eating right AND exercising.

And in an entirely different study that promoted the necessity of both diet and exercise for weight loss, those that didn’t lose as much weight from exercise still benefited! The participants on the calorie-restricted diet lost 6% of their body fat, versus the 2% the exercise-only participants lost. But the 2-percenters also decreased their risks of high blood pressure and heart attacks, so everybody won!

When it comes to optimum health, there aren’t any great shortcuts. You’re going to have to push yourself to finish that set of burpees. You’re going to have to pull yourself from the cake and remember that no, you can’t eat it too. Sometimes you will veer off path, but like I said in the beginning, a healthier life is a life-long race. As long as you stay on track, you’ll be in first place.

If exercising is still too difficult for you, relax! I have taken time to provide tips on how you can motivate yourself to get out that bed/chair/ and sweat wherever you are. Yay free stuff!

What’s the hardest thing about being healthier? Eating right? Exercising? How do you cope?

← Prev: Why Gluten is Bad For You and Why I'm Still Gonna Eat It Next: Why I Live a Healthy Lifestyle Even Though I’m Not Fat →