The Real World: Where Passion Comes Before Leadership

Sometimes I hate the way school works. There’s such a huge emphasis on leadership. Get a leadership position in your club. Put it on your resume; people will hire you. I just think it’s a load of crud.

I think school is the only realm where leadership comes before passion. 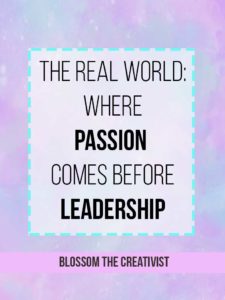 School, specifically high school, is trying to prepare you for college and 9 to 5 jobs (to some extent, of course. I mean,, when are you really going to use the Pythagorean theorem, man?). It just wants to transform you into a professional, which is totally fine. People love leaders. Leaders have cajones (sp), have talent, have a way with people.

But don’t confuse leadership with pure happiness. You can be a leader of the Apple’s up-and-coming rival, Banana, but still live life with a hole in your heart.

High school put a huge emphasis on doing what I (academically) excel in. “You’re really good with science. You should lean into healthcare” or “You’re really entertaining. You’d be a good teacher.” First of all, I shouldn’t even have taken them seriously. Who would I be if I allowed people to tell me what to do with my life?

But it was rare to talk to one of my teachers and have them tell me to follow my heart. I guess they just wanted the best for me? Or they thought I was too young to know what I really wanted to do with my life?

And it sucks. Because I sure as heck know how to lead people, build strong relationships, and even stronger teams, but I’m still undecided in college.

News flash: being undecided ALSO can be a huge waste of time (and money). Some majors do not require you to take certain general eds (basic core classes). But because you don’t know what major you want to pursue, how would you know?

And you know the funny part? I don’t consider myself a natural-born leader (apparently those don’t exist), but I know I didn’t learn leadership solely from school and picking up the slack of terrible teammates. I think my leadership skills developed most from the extracurriculars that I held close to my heart. For instance, I used to be president of Asian Culture Club. President. And I’m black.

The president before me that was graduating sought me out and wanted me to become VP for the upcoming school year, but when the actual president she appointed was pulling the team down, girl, you cannot comprehend how swiftly I Swiper-the-Fox’d the position from her. No voting or anything. Why? Because the team members knew that I was the better fit. She wasn’t stepping up to the plate. She didn’t have the drive or the motivation, so someone else had to. She probably took the leadership position because it “looked good on her resume.” And that’s sad because during an interview, you can lie and say you were the best president of the club but you did jack diddly squat.

Asian Culture Club was a success because I was passionate for Asian culture. I didn’t really care for the leadership title on my resume because that wasn’t going to better the club or bring any of our goals to fruition. I put the club before schoolwork, before sleep, and even before eating sometimes. I did it because I wanted to, not because recruiters wanted me to.

Tomorrow night, I’ll be on stage again with a group of friends that learned a complicated choreography I made up. The lead choreographer gave me the opportunity to create a dance and teach it to a few dancers. I gave my all to this group as well: choreographed a (FIRE) dance while I was on break, spent hours perfecting the dance mix itself, and spent weeks teaching it to people with very different skill sets (and attitude ranges). But when we were dancing under the leader’s choreo, under her dance mix, and her instructions, you can see the discrepancy. In fact, if you step in a rehearsal, you can hear the discrepancy; there was a lot of frustration, a lot of arguing, and yelling when we were under her rule. This is what happens when leadership is put before passion. In the real world, it often fails.

She had no passion for choreographing and teaching a dance (she’d get frustrated reaallll quick when someone wasn’t getting a dance move), no passion for mixing music (she didn’t really know how to do it, so some people say), and none for listening to what others had to say sometimes. And because of it, we weren’t a strong team. In fact, most of us are probably not going to come back to the dance team next year.

Wish me luck tomorrow, you all! Hopefully, I’ll be able to record it and show it on my youtube channel. What does leadership mean to you?

← Prev: How to Give the Best Presentation in Class Next: Why Don't You Ask Questions in Class? →