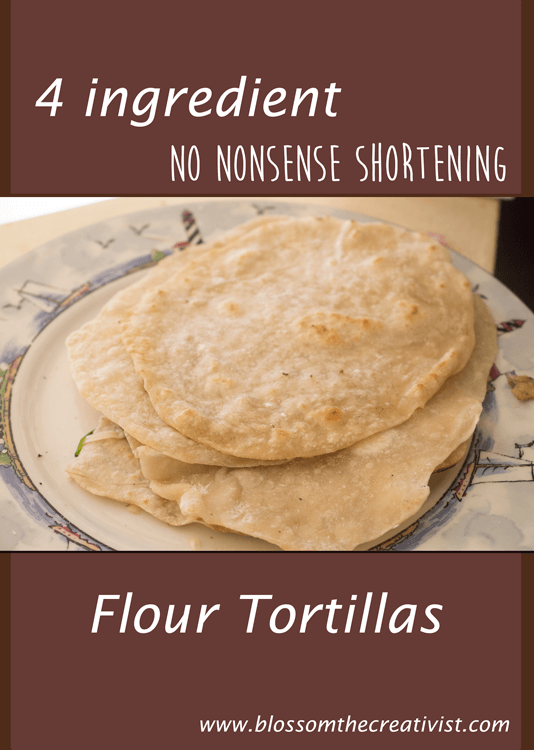 So I was in the creativist mood (after failing at making yeast-less bread…knew it was too good to be true) and just decided to whip these babies up. My mum just recently bought tortillas for fajitas but they don’t ever last when I’m in the house. I thought to myself, self, why don’t I just make these myself?

I didn’t do it for the healthiness in all honesty, but it really is better than the store-bought brand. I just wanted to be self-efficient and save as much money as I can. And it’s not often I eat these packaged things anyways (Plus they’re not even legit. Ask a Hispanic and they’ll be like, why are you using flour? Our tortillas are made of corn. P.S corn isn’t a vegetable.).

Therefore, went on the new google, Pinterest and found some recipes. A few others called for shortening and I’ve never ever bought nor needed to buy shortening before so I quickly exited out. I just don’t feel the need to buy things that I don’t normally use, especially when it’s more fat.

Finally, I came across this recipe.  I read a few of the comments, the majority praised the recipe so I gave it a go the next morning.

¾ cup water+ a little bit more because it was a bit dry…not too much!

Some people on the comments said to add some baking powder. I didn’t.

First step was to combine the 2 cups of flour and ½ teaspoon salt. In a bowl. Then stir in the ¾ cup water and the 3 tablespoons of oil. 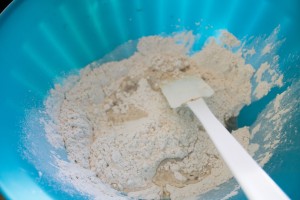 Next is the messy part. KNEAD! I honestly didn’t know how to do that so I just played with the dough in the bowl until it looked presentable (added some of that extra water). 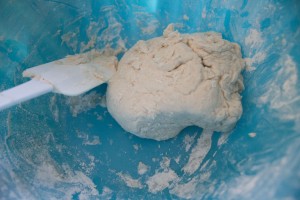 Let it sit for 10 minutes. I took this time to straighten up the kitchen because my siblings are gross and disgusting and don’t clean up after themselves. Washed some pots, scrubbed the stove, swept the floor (waited for my boyfriend to desperately text me back), the works.

Then, got out some waxing paper I used last night for I don’t remember what and lightly floured it so I could roll the dough there.

I got my hands with a little flour and pinched off a small ball of dough. Then I clapped it in between my hands a bit and smooshed it on the floured wax paper to get it into a starter circular shape (I discovered this technique last which is why the tortilla on top in the picture is the most round!). 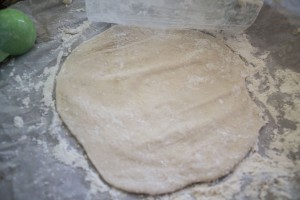 Now, I don’t have a fancy schmancy pin roller because my mom doesn’t bake because she’s African. So, I had to improvise with a glass. Floured that guy up and rolled it in all directions. 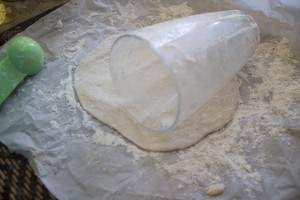 When I was halfway done rolling, I got the frying pan ready with some canola oil spray on medium heat. When the oil was hot, I put the first one in. The recipe called for waiting a minute on both sides, but I think that’s a bit too long, especially if it’s on medium heat. I did this once and the tortilla was a little too hard for my liking. Don’t forget that it cooks a bit even after it’s off the fire. 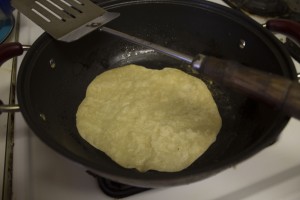 So I continued to roll while waiting for one in the pan to darken, and then transferred to a plate, roll, wait, transfer to a plate until I got 8 tortillas, just like the recipe said I would. 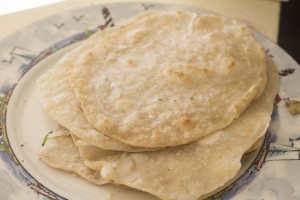 I honestly burnt one, but it tasted sooo good. I liked the crispiness of it.

This was a real simply recipe. Just a few tips, make sure your dough is as flaaat as it can be when you roll it out, or the texture will be off after you finish frying.

Don’t wait for it in the frying pan for too long. The longer you wait, the harder and less elastic it will be. 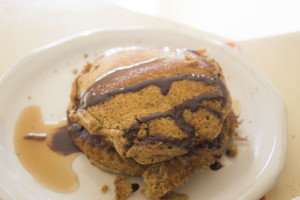